Pallas Athena a Short Film by Siba Sahabi from sibasahabi on Vimeo.

‘Between Two Rivers’ is the ancient Greek translation of the term
Mesopotamia, the cradle of Western civilization, birthplace of the
pottery turntable and primary inspiration of designer Siba Sahabi for
her new collection. Through ten new sculptural felt vessels Siba makes
the connection between this ancient land - located between the rivers -
with its pottery innovations and Western ceramics culture which
developed through these new technologies.

The turntable, that aided potters to design circular objects more
accurately and faster, was invented in 3500 BC in Ur, an ancient
Mesopotamian city-state located in modern Iraq. Around 2200 BC this
invention was introduced in Greece and thus sparked a new style of Greek
ceramics called Minyan pottery which Siba has reinterpreted in her
​​felt sculptures.

A circular, ribbed finish is one of the distinguishing characteristics
of Minyan ware which reflects its production process on a potter’s
turntable. Although the turntable no longer plays a significant role in
the production of modern large-scale pottery today, the appearance of
hand-turned ceramics is often imitated by producing circular shapes with
fine ridges.

The objects from the collection, that comprise a series of carafes and
cups, are made from coiled coloured felt strips (3mm thick) coated with
a layer of paint on both sides. In this way, each object shows three
colours: the original colour of the felt (surface of the ridges), the
inside, and outside of the objects. The dense felt material beautifully
translates the heavy appearance of the Minyan ware and exaggerates the
appearance of the oversized objects, some of which are up to 50cm high.

A specially-commissioned film is screened alongside the exhibition. Made
by Siba Sahabi in collaboration with Lisa Klappe and Niels van den Top,
the short film entitled ‘Pallas Athena’ juxtaposes the setting of a
Greek pre-antique pottery workshop with the modern techniques of the
felt coiling used in Siba’s objects. The short film is dedicated to the
wise but short-tempered Greek goddess of inspiration, crafts, art and
war. According to myth Pallas Athena taught textile classes to, among
others, a talented but troubled student called Arachne who denied that
she was taking lessons if ever asked. To punish Arachne for not
acknowledging her teacher, Pallas Athena turned her into a spider. 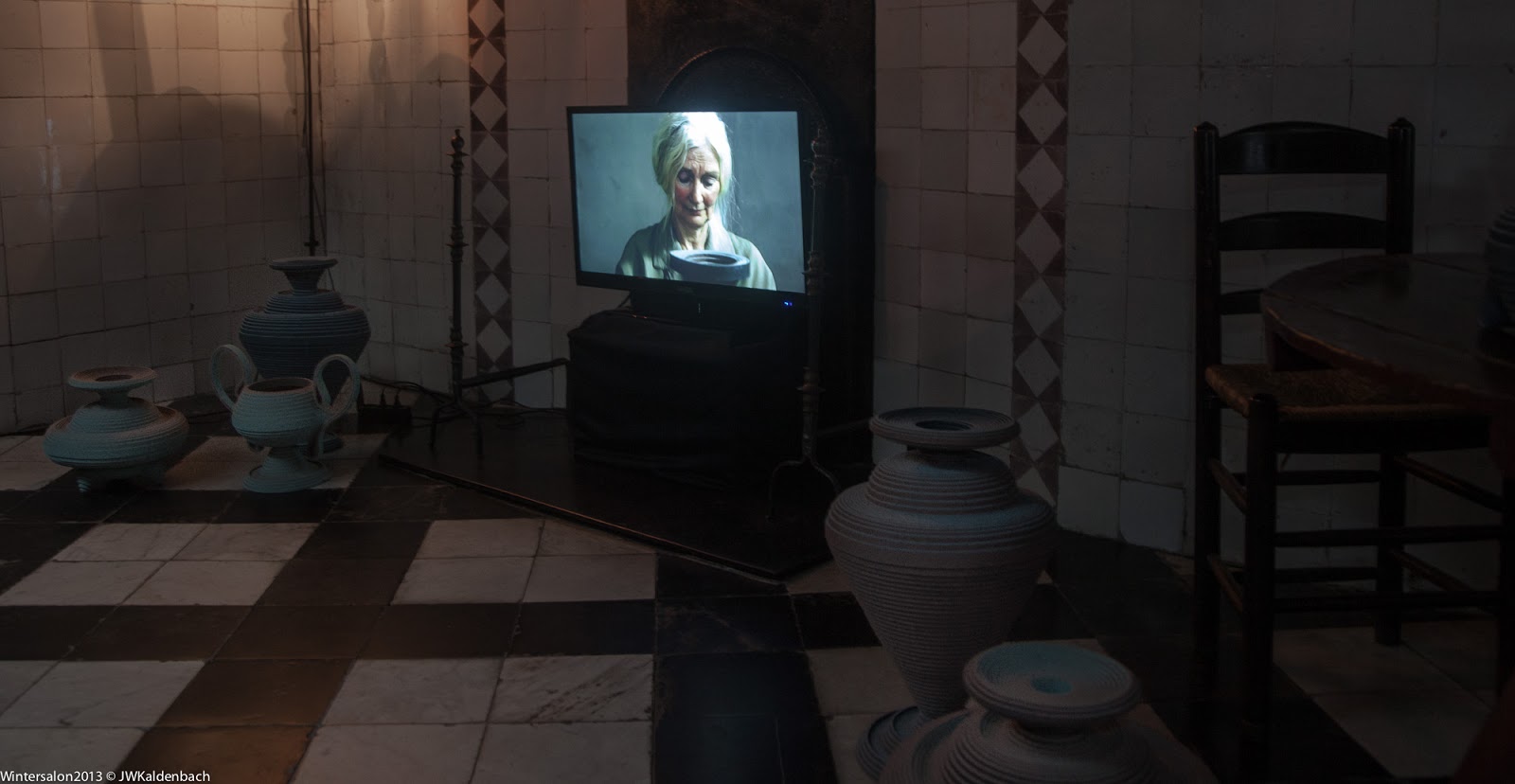