Do you wonder why SALON/ goes to Aruba in November 2011? Gijs Stork gives anwers 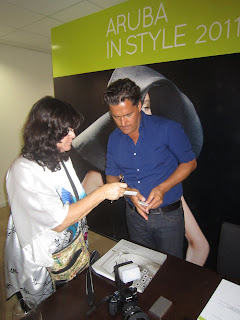 
SALON/ looks for new paths, new places and locations to give exposure to known and unknown artists, designers and the likes. To create a context for discussion and cross-cultural productions on grounds which maybe are not obvious when you think of fashion, art and design is what opens your eyes....or resets your gaze in how you previously interpreted contemporary art, fashion and design.
From 3-13 November 2011 SALON/ will be in Aruba....Aruba? Is there more to enjoy than sun, beaches, parties and a relaxing lifestyle? Why Aruba?
What better than to ask the question why to the initiator of this Aruban SALON/ edition, Gijs Stork himself:

Gijs Stork: "The reason for SALON/ to come to Aruba is actually a confluence of circumstances. I always have had a strong bond with Aruba, professionally as personally. From the nineties to now I am involved and moved by it's art scene. Together with a few friends we created art exhibitions and publications on the island. It is through them I was introduced to young talents, like fashion designer Percy Irausquin who studied at The Gerrit Rietveld Academie Aruba at that time. And I tried to give artists like him a chance to get feet on Dutchs ground. But it was excually in 2009 that I started to
discover a renewed, younger and progressive art scene in Aruba.  I met Ronchi de Cuba who was  planning to organize a fashion week on Aruba, called Aruba in Style. I told him about the SALON/ editions we organized in Amsterdam and South-Africa and the idea was born to organize a SALON/ here in Aruba during Aruba in Style, not only to ad a cultural component to the program, but also to celebrate the relation between Aruba, the Netherlands and it's cultural cross-over."

Salon/BLOG: But what makes the Aruban fashion and art-scene according to you worth wile and worth visiting?

Gijs Stork: "There is this appealing energy and new cultural economy going on in Aruba what I also experienced during our SALON/locale in Cape Town, South Africa; a new energy of a young generation free from history, free from anger, free to make unconditional choices about which elements of their heritage they would like to incorporate into their creations. Furthermore, Aruba has a preparation course of the Gerrit Rietveld Academy and an academy for Fine Arts & Design will open on Aruba in 2012. And last but not least the island forms an unique hub between South-America, North-America and Europe."

Gijs Stork: "Wherever SALON/ lands, whether it is Aruba or Istanbul, we aim for discussion and interaction between the local population, the local history and its art culture. Furthermore, we aim for education and reason on different levels and layers. During AIS/SALON over 60 students of Colegio EPI will be trained to be cultural ambassadors of the island and will volunteer for us; we organize workshops for youngsters in San Nicolas, one of the less fortunate cities of the island; But most of all we would like to show the local population what is happening over seas, what is possible outside of the island because it is very hard to get of. To give exposure to artists who came from Aruba but have make a living elsewhere gives Aruba hope.”

Gijs Stork: “No. But maybe more than other SALON/'s, AIS/SALON under stresses the interaction between Dutch and local identity.

Salon/BLOG: How can we detect this cross-cultural identity in the work of the participants of AIS/Salon?

Gijs Stork: “The cross-over will most of all be shown in the way they expose their work, but actually the cross over is already there: most of the Aruban participants work and live in the Netherlands and come to Aruba to return to their birth ground.  But in upcoming SALON/ editions in the Netherlands they will express their Aruban identity again.”

Thank you Gijs. Now it is clear SALON/ has a fundamental reason to go to Aruba.

///// WILL YOU JOIN SALON/ TO ARUBA IN NOVEMBER?
Book your flight at KLM and ARKE and your passe-partout ticket for AIS/SALON on our website www.salon1.org.
///// If you are fast, we allot ten tickets for the Aruba In Style Dutch Fashion Show the 4th of November, where Mattijs van Bergen, Marga Weimans, Edwin Oudshoorn and three finalists of ArtEZ Arnhem will show their collections.
/////www.salon1.org
/////www.arubainstyle.com