Yesterday The Wallstreet Journal columnist CHRISTINA BINKLEY reported about the amount of fashion weeks around the world: "Milan, Paris and London. At these events, designers parade their collections for retailers and try to make a splash in the fashion press. But in the past five to 10 years, the numbers of cities and nations holding fashion weeks has burgeoned."


Unfortunately we could not read the whole article, but one of our facebook friends summerised it for us.
Miss Ramirez wrote: "...they say that all the small fashion weeks that have been organized in recent years around the world do not really make a significant impact when it comes to fashion trends, compared to Milan, Londen, Paris and New York. But they still can boost local economies by pushing the fashion and retail business locally". 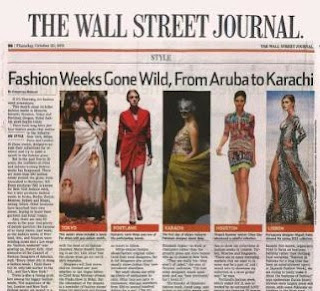 Like initiator of the Aruban Salon, Gijs Stork, puts it: "Wherever SALON/ lands, whether it is Aruba or Istanbul, we aim for discussion and interaction between the local population, the local history and its art culture.[...] But most of all we would like to show the local population what is happening over seas, what is possible."

But what do you think? What is the value of local fashion weeks? Entertainment? Business? A hype? A signal that local fashion gets more appreciation and attention than the very expensive luxury brands nobody can really afford?

Personally I think the last thing is happening here, and is a significant impact after all: local is sexy, is personal, and is something to be proud of. As a Dutch girl I rather would buy something of a Dutch designer than of one of LVMH's mass-luxury brands....if I only had the money.