At Soepboer & Stooker you can still admire the graduation collections of Morta Griskeviciute, Poul Brouwer and Jolka Wiens of The Rietveld Academy 'MMXII' - mentored by Niels Klavers and Oscar Raaijmakers - UNTIL July 28th 2012 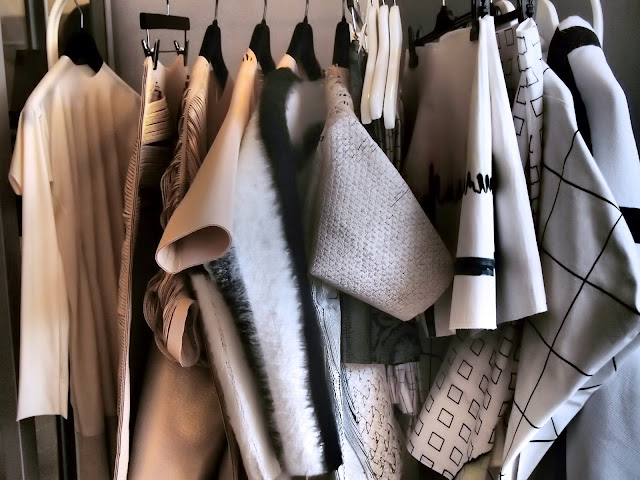 The Rietveld Art Academy in Amsterdam hasn't have a name when it comes to its fashion department and every year the number of graduates in fashion design declined, with probably this year as it's all-time low with just three fashion graduates. But better fashion times are coming.
Since a year the fashion department has a new director, and not the least: fashion designer Niels Klavers. Together with another big fashion name Oscar Raaijmakers, Klavers trained and mentored the fashion graduates Morta Griskeviciute, Poul Brouwer and Jolka Wiens. These graduates told they had the best final year of their fashion education thanks to Klavers and Raaijmakers, because just being with three students you can get the most of attention and guidance, especially from two enthusiastic and professional teachers.
The energy and quality of this years graduation collections is high and stood out in clear concepts, research process and experimentation. These three collections and having Niels Klavers and Oscar Raaijmakers on board give a new appeal to the Fashion Department of the Rietveld. Result: a dozen of future fashion students have chosen to apply for the Rietveld now instead of the better-known fashion academies out there.

Poul Brouwer's collection called SHAME, focusing on personal matters he feel or felt embarrassed by or struggled with, like being a red head or liking the Spice Girls as a young boy. The feeling of shame he translated in covering up true identity for the outside world using blankets as his starting point. What kinds of silhouettes take shape when folding, wrapping and layering stuffed blankets on the male body? His pattern design was formed by coincidence. Amazed by the pattern of common tiles, he draw with water-soluble black markers grids by hand on cotton shirts, and, again, by coincidence, discovered the black ink blurred in a thousand colours when dropping water on the thin lines. It fits his concept of SHAME and to resolve the shame, because instead of 'walking the line', Poul is more the kind of person to push the envelope and be different and colourful. 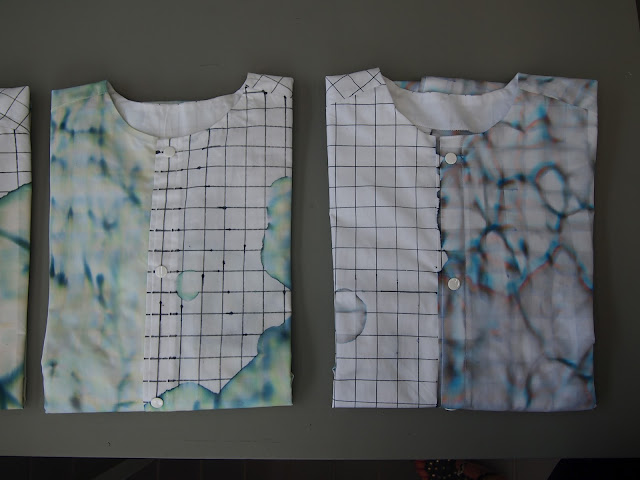 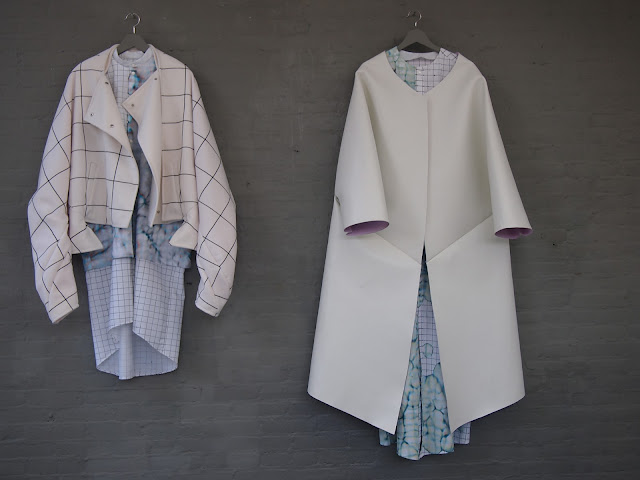 'Fashion has a pragmatic aspect that I missed in other art disciplines; it combines creativity, technical skill and 3D', Morta explains in an interview. She is not per se a fashion designer, more a creative director with an educational background in illustration and fine arts. 'My collection resembles the way I draw: expressive yet controlled'. For her graduation collection she was inspired by the photos of Robert Polidori, who captures the chaos of decaying and neglected interiors, ruined by disasters, wars or by the hand of time. Morta is fascinated by beautiful ugliness, combining 'trashy elements with contradictory elements; chaos after the chaos'. She focussed especially on the textures, the colours and the flaws of the interior and its materials: torn wall paper, moss on rotten wood, scaled off paint of former luxurious places like opera houses, ball rooms, cinema's or warehouses, and translated these images in textiles -like furry flocked plastic, paper and knitwear- and in shape - expressive and loose- but as a whole all well executed. 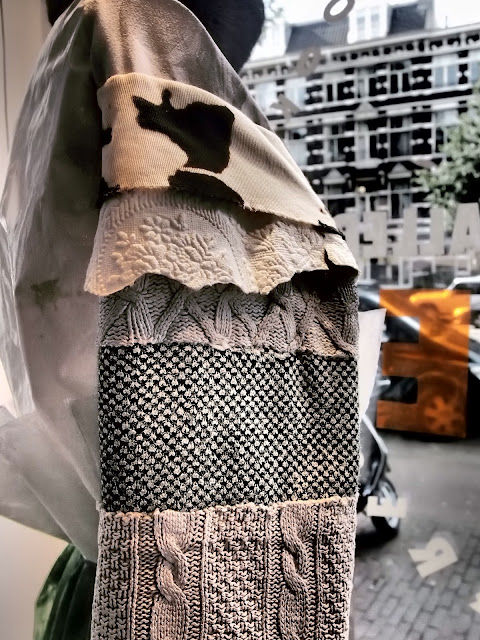 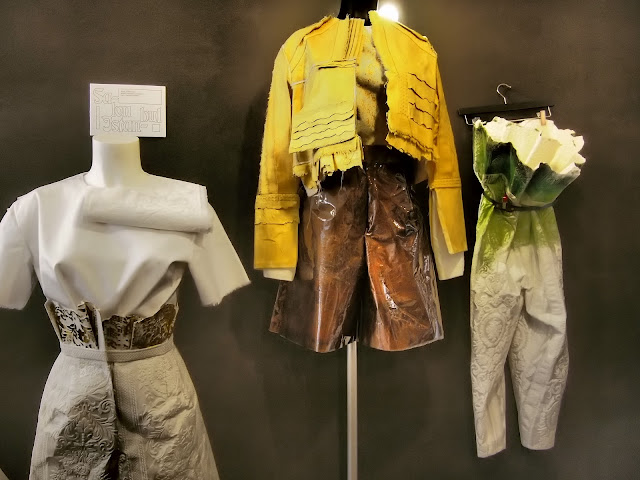 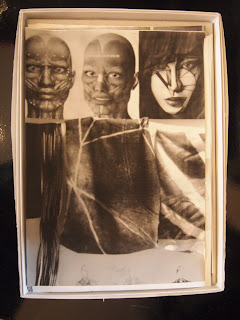 'I am not your typical fashion person being mostly excited by the psychological and social aspects of design', Morta Wiens explained and continued: 'What does a fabric like neoprene expresses and what kind of experience gives it when wearing it?' Her designs of laser-cut neoprene are flat 'dead' pieces and need a body to come alive and to reveal its identity. Although neoprene and laser-cutting is considered as 'done and dull' due to the popularity of the raw material on todays runway, Morta said it motivates her even more to prove neoprene and laser cutting can still astonish. For her graduation project she researched the anatomy of the human face, how the muscles are placed and creates different facial expressions, mimicry, because the face can communicate on many different levels. This concept she translated in her laser-cut graphics and designs. Like a face, a body gives new shape and therefore a new expression to her cobweb black and white fashion designs. 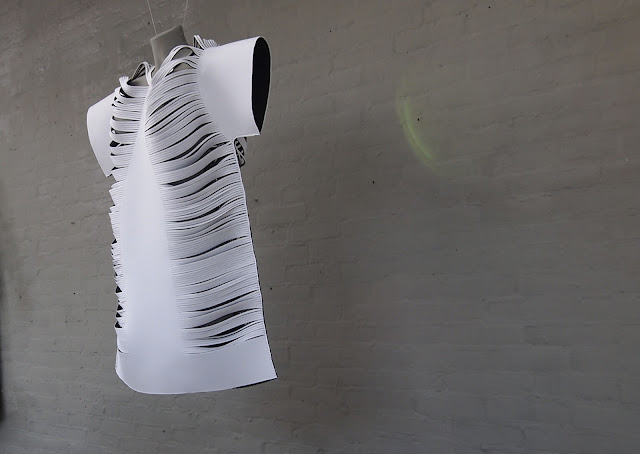 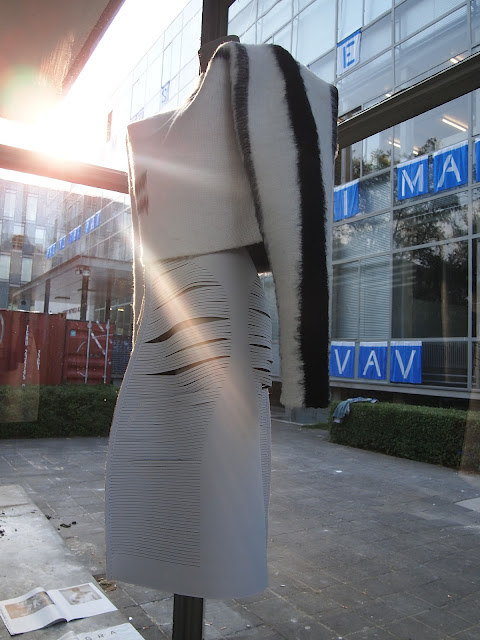 pictures and text by Marij Rynja